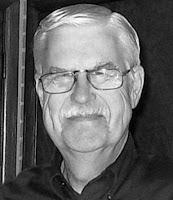 The saying goes, one should never wait too long to contact (or re-contact) long-lost friends or relatives; the same could be said of long-admired artists, like Helmut Ajango, architect of the Gobbler Restaurant and Motel, who passed away November 2013. You never know when you'll lose your only chance. I'd mused on the idea of sending Mr. Ajango a postcard or letter telling him how much I admired the Gobbler's design and how much interest the building continued to inspire decades on. I'm sure he already knew, judging from the number of Web references to his designs steadily amassing over the past decade or so. Of course, the Gobbler was only one of many dozens of striking buildings, homes, banks, and churches he dreamed up on his drafting table that still bring a touch of bygone-era beauty to towns and cities across the Midwest. I never sent that card, but wish I had. RIP, Mr. Ajango. Image courtesy Madison.com.
Posted by Lenka Reznicek at Friday, June 12, 2015 2 comments:

What's the Status of the New "Gobbler Theater"? 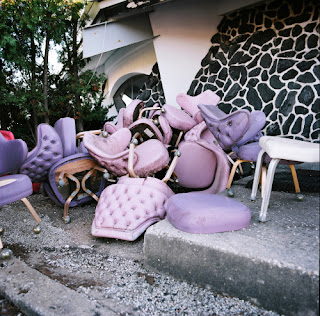 UPDATE, 6/12/15 4:25PM: Check out the Gobbler Supper Club & Motel Facebook page for photos of the ongoing restoration; looks like a lot has been changing beneath the famous dome!

It's been a little over one year since the Midwestern press announced Wisconsin entrepreneur (and fellow Retrologist) Dan Manesis' plans to resurrect The Gobbler Restaurant as a 400-500 seat entertainment venue. Has anyone heard "through the grapevine" if there's been any progress on the project? [Fantastic image of discarded Gobbler chairs courtesy of the Mid-Century Modern Freak blog. I'm unsure of the photographer (I will gladly credit) or the date, but about 10 years ago we found one discarded purple chair in the Gobbler dumpster that's a proud conversation piece.]
Posted by Lenka Reznicek at Friday, June 12, 2015 1 comment:
Newer Posts Older Posts Home
Subscribe to: Posts (Atom)

The Gobbler on the Web

Requiem for the Gobbler Motel by Lenka Reznicek is licensed under a Creative Commons Attribution-ShareAlike 3.0 Unported License.

This website and its author have no affiliation with the owners, representatives, or agents of the property known as the Gobbler Theater, and formerly known as the Gobbler Supper Club and Motel, King Arthur's Inn, the Round Stone Restaurant, Jon-Jon's Rib House, the New Gobbler, nor any other name or d/b/a under which the property has been operated in the past or present.

If you wish to redistribute this site's content or photos on other publications and websites, electronic or otherwise, please see the terms of this site's Creative Commons License.